Home » Travel » Stories From the Road » Bungy: The Jump of My Life I Almost Didn't Take

Watch the full video  (including how they get you down!) here.

______
If you would have asked me five, ten years, or even one year ago if I would ever jump off of a bridge in New Zealand, or really any bridge, I would have given you a “look” and politely asked you to get your head checked. 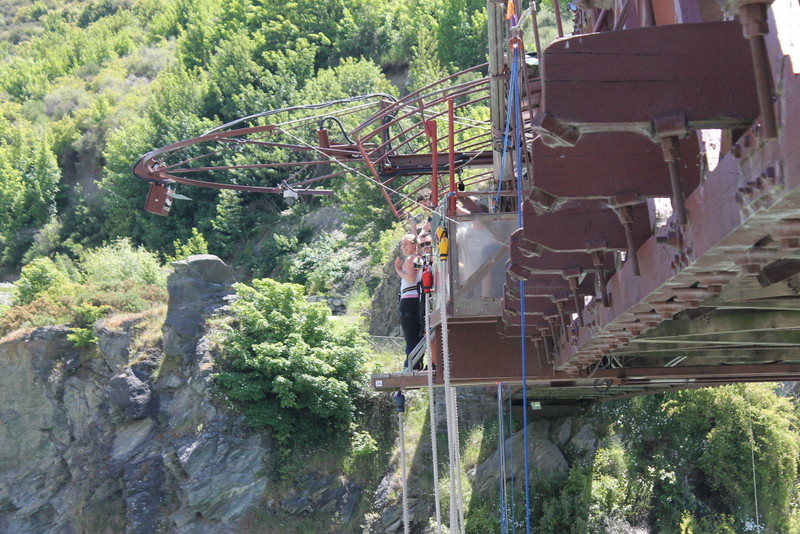 A little more about me (to put this in context):  I’m the sort of girl who overthinks everything, considers every consequence, can’t make a decision to save her life, and is (generally) perhaps a little too responsible.  I should mention, if there’s one thing in this world that gives me a physical reaction of fear…it’s heights.
The moment I decided to visit New Zealand, I thought of one thing outside of sheep: adventure sports and adrenaline junkies.  My initial thought when I watched a bungy video?  I’d rather hang with the sheep.
But what about that girl who, despite her better judgment, jumped off the side of a mountain—with only a parachute and a small Nepalase man on her back?  Where is THAT girl?
Oh, that girl.  That was different.  That was a one time thing.  I was traveling solo in Nepal, after thriving in India (by thriving I mean overcoming fears of traveling to India and simultaneously not getting ‘Delhi Belly’…success!).  That was when you met that cool British couple that convinced you.
“I’ve paraglided all over the world, in fact, I own a paragliding business back home.  This is the best place in the world to paraglide, and this is one of the most beautiful days I’ve ever seen to do it.  If you don’t push yourself to do this, you will always regret it.”
Oh, okay…fine.  I’ll go.  It’s the Himalayas, for God’s sake! I remember thinking…that was probably the bravest I’ll ever be in my whole life.
…Ahem!  Pardon me…isn’t this true of bungee jumping in New Zealand?  Isn’t this where it was invented? Isn’t this the adventure capital of the world?  Isn’t it something you HAVE to do?
More about me: I don’t believe in “have-tos” in travel, or in life.  I believe if something is considered a “must-do” or a “have-to,” there’s likely a reason for that, and you might want to strongly consider it.  But it’s your trip, your life—if you don’t want to do something, you shouldn’t ever “have to.”
Yet I also believe in and know about regret.  It’s more powerful than fear, more compelling than obstinacy.
I decide to wait until I arrive in New Zealand to make the decision.  When people say to me, “Oh! You’re going to New Zealand? …Are you going to bungy?”  I reply confidently, “No…[insert some excuse as to why it’s not really that cool.]”  But a small part of me knows, I will probably go through with it.  Maybe.
Fast-forward to December in Queenstown, New Zealand.  Today is the day “the jump” fits into our schedule, if we are going to do it.  Oh, so there’s no need to commit this very moment?  We can take our rental car to the original bungy site of Kawarau Bridge and watch others partake before signing up?
So that’s what we do.  We drive a few minutes outside of town.  I’m a dreadful combination of nervous and excited, but mostly excited, like I’m about to see some new sight from my travel list.  I’m just watching for now, remember? 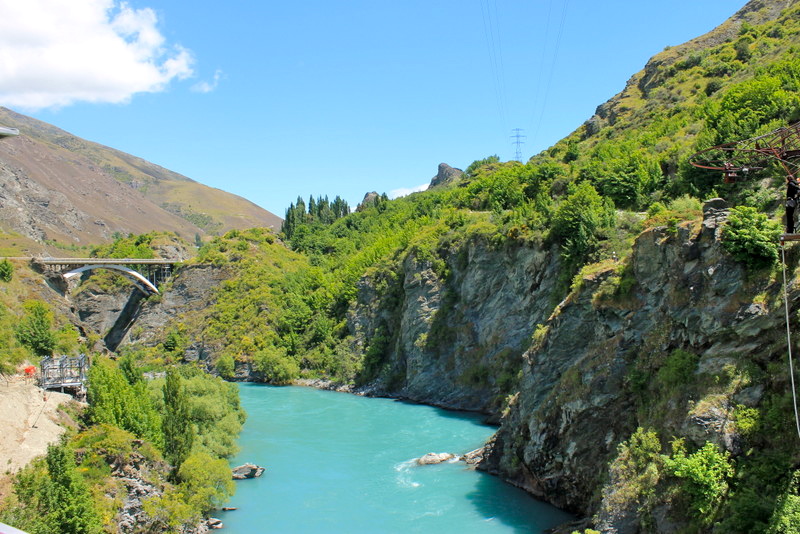 Oh, god.  There’s a bridge.  There’s a river.  There are these tall mountains.  There’s a ledge.  I watch a few seasoned bungy pros jump confidently off the ledge, head first.  I think to myself, I can’t identify with these people.  These are those “adrenaline junkies”…they’ve probably sky-dived, hell, they’ve probably bungeed all around this country already.  That’s not me.
Then I watch a few “first-timers” get up there.  The staff begins to count down “3…2…1…”  Their face goes a bit pale, and the fear is painted in their eyes.  That’s more like me.  I start to think, “if they can get up there, so can I.”  Of course.
When the voice says, “BUNGY!” the person just stands there.  They begin to shake their head, as if the rest of their body isn’t already shaking.  They may take a few steps back from the edge.  You can hear the staff telling them, “just don’t look down, just don’t look down.”
This whole scenario plays out a few more times, until even I am like, “just go already!”  When these people finally do jump, they half-heartedly jump feet first and flail the whole four seconds down to the river.  They then are flipped upside down, almost whiplashed, as the bungy catches their fall.
I don’t want to be one of those people!
After watching four or five people jump, a rush of confidence comes over me.  I am going to conquer this fear and this bridge; this fear will not conquer me!
I go to sign up.  Once you pay and sign your waiver, there’s no refund—jump or not.  So I know, as they swipe my credit card, that I am IN.  There’s no turning back now…is there?!
As I stride confidently up to the bridge and the queue, the panic starts to wash over me.  The staff can tell, and they are fantastic: they joke with me, distract me, reassure me.

It’s a fifteen minute roller coaster of “I can do this,” “No I can’t” waiting for my turn to jump.

What kind of jumper will I be?  Right then, in that moment, as I stand up with my legs bound and my bungy attached, I am a mess.
Then suddenly, I am calm.  I am clear.  I am still shaking but my head is focused, determined.  I smile and wave nervously at the camera, let go of the handle and waddle to the edge.  They tell me not to look down, so I don’t.  “3..2..1…”
________
So, what kind of jumper was I?  There are two sides to every story.
According to my boyfriend, who was watching me jump (and took the pictures, thanks!) the man on the loudspeaker exclaimed “we’ve got a screamer!” followed by laughter from the crowd. So, that’s one side. 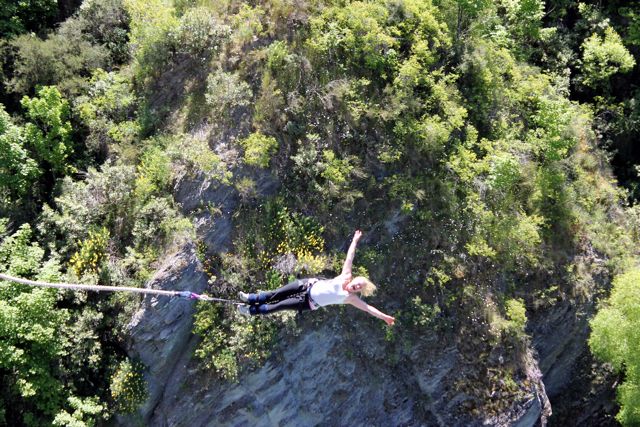 The other side comes from my good friend, with whom I met up in Sydney as she was about to journey to Queenstown and was thinking about bungy-ing.  I told her my story and showed her my photo, and she said, “you look like Pocahontas!” So, that’s another. 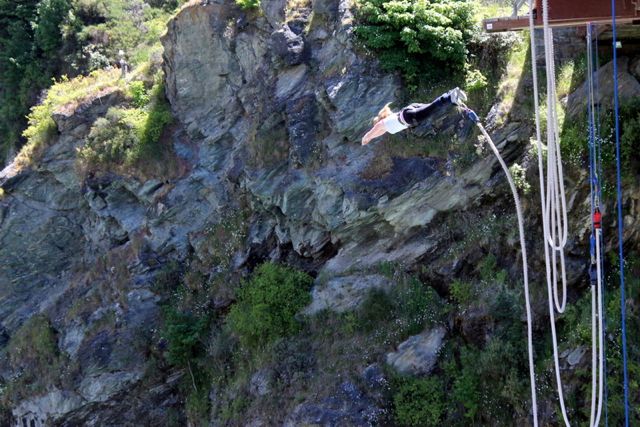 For me, I resolve that my eyes must have been closed for part of the free fall—because the next thing I knew my face was right up close to the river.  Then the rebound, after the initial jump…that was the most fun.  Yes, I used the word ‘fun.’  But it really was mostly a blur, fueled by incalculable amounts of adrenaline and ultimately, pride.

This is just one example of why and how travel shapes us.  To some, a bungy jump is just a brag-worthy two minutes of your life, or a thrill for the sake of a thrill.  For me, I still reference it as a source of confidence and fearlessness.  It represents proof: proof that I sometimes need to rely on, in the moments that follow in the rest of life (and they are there, more this year than ever) when I have to overcome feelings of fear or uncertainty…and just jump.

Have you bungeed somewhere in the world? What kind of a ‘jumper’ do you think you would be?

What a joy it is to be wandering winding streets,

Like so many of us, I’d been dreaming of travel