Allow me to take you on a journey of edible delights through one of the world’s greatest cities!  But first…

My fellow Americans, I lived in LA for years and boasted that I could find almost any type of international cuisine there. While I have read about a few Maylasian restaurants since I’ve been back, I quite simply hadn’t heard of laksa until my friend the Sydney-sider raved about it. He talked about it for ages. I remember thinking, “is it reaaaally all that good?” He then worried that my expectations would be too high after all the talk.
Now, this happens quite often, my friends. Someone will go on and on about how amazing a dish is, only for me to try it and have to lie through my teeth about how much I agree. In this case, as good as said dish may be, it simply falls victim to unattainably high expectations. THIS WAS NOT THE CASE WITH LAKSA. 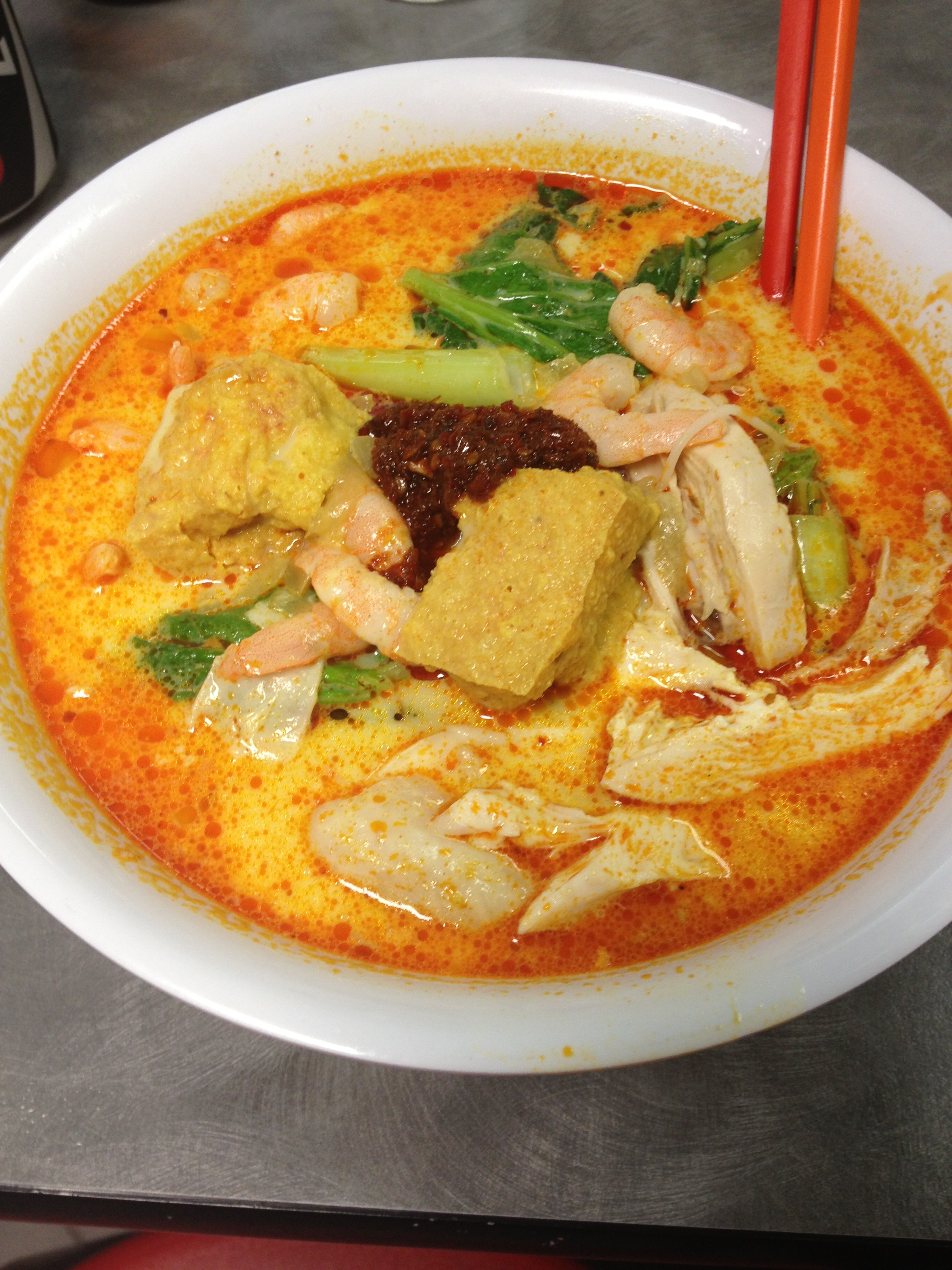 My favorite laksa of the trip!

If, like me, you had yet to discover this culinary wonder, you may be wondering…what is it?  Besides being the object of my eternal affection, laksa is in essence a spicy curry noodle soup.  Typically, it contains rice noodles in a curry broth, with bean curd, chili paste, a protein (I love chicken and prawns in mine), and perhaps some vegetables or herbs.  Drawing from Malay and Chinese influences, it can be found throughout Malaysia, Indonesia, and Singapore.  Lucky for you, it can also be found throughout Sydney!
There are many claims to the “Best Laksa in Sydney” throne, but after some research, it seems that many agree it’s Malay-Chinese Takeaway (58 Hunter Street, www.malaychinese.co.au)  This is the favorite of the Australian who introduced me to it, as well as this entire blog devoted to laksa that I found…(brilliant!)
I could seriously write an ode to laksa.  In fact, I think I might.  Rather than listen to me go on and on about it, just accept that if you remotely enjoy Asian noodles (and if you don’t, get off my site…), try it for yourself in one of the many locales in Sydney.
Insider tip: they sell bibs.  GET ONE.  You might feel silly wearing one because you’re a) not an infant and b) not eating lobster.  So you might choose to forgo the 30 cent option.  But if you look around (and/or heed my warning) you’ll see that experienced laksa consumers never say no to them.  You’ll be free to enjoy your laksa with all the carelessness this splash guard provides.  Your clothes will thank me. 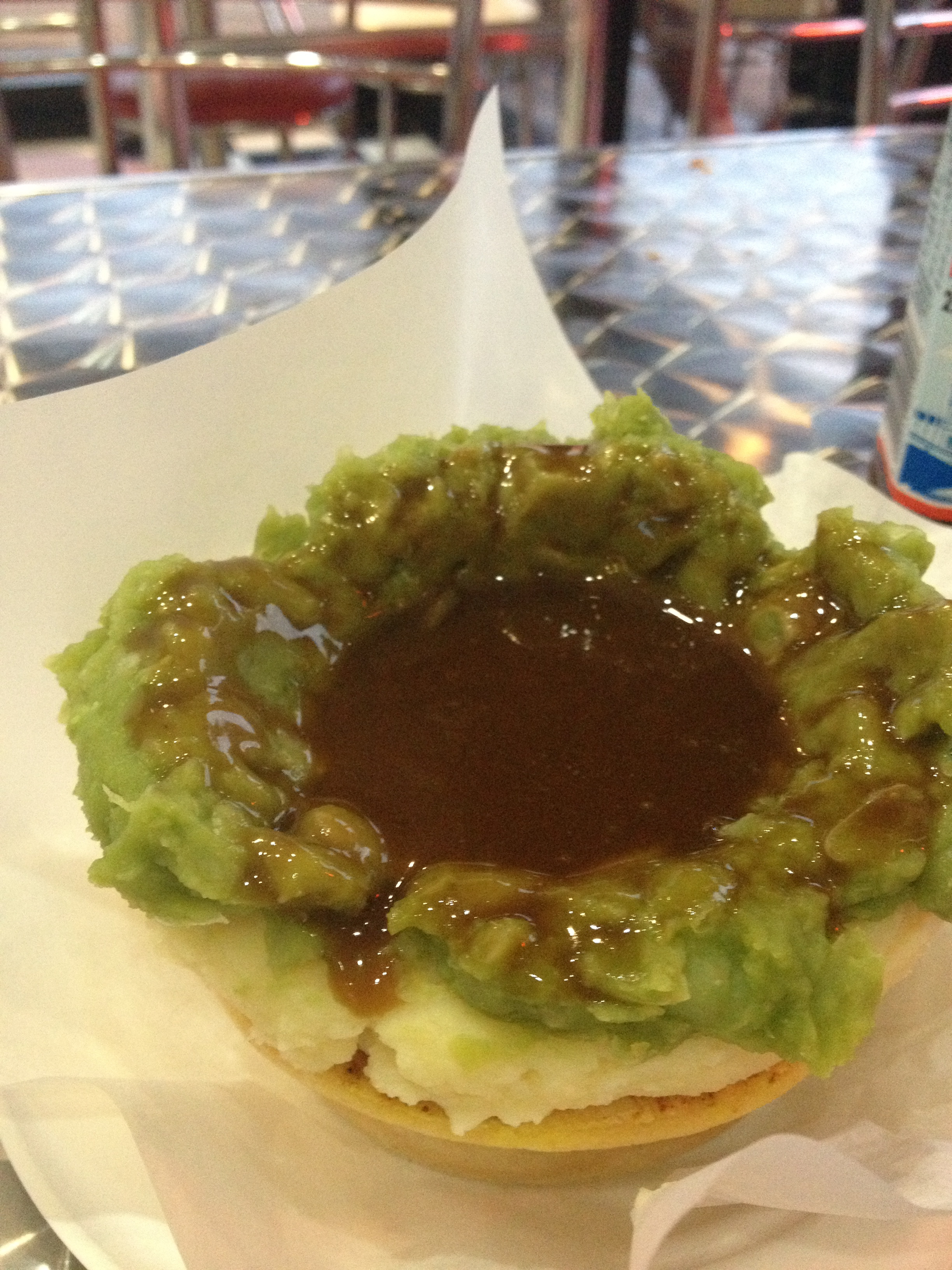 Harry’s Curry Chicken Pie (I swear it’s there, under all that potato/pea/gravy mash.)

AKA a Sydney institution. AKA the meat pies of my dreams (if I were to dream about meat pies.)
If just the sound of “meat pie” ruins your appetite, I encourage you to think it over and try one anyways. Start with perfectly golden-crusted pie, full of your chosen filling (can I recommend the curry, chicken or, the house favorite, tiger (beef)) topped with a healthy portion of mashed potatoes, even more mushy peas, and then filled with luscious brown gravy…mmm. Would you judge me if I were drooling on my keyboard? (If no, I admit it. If yes, forget I said anything.) 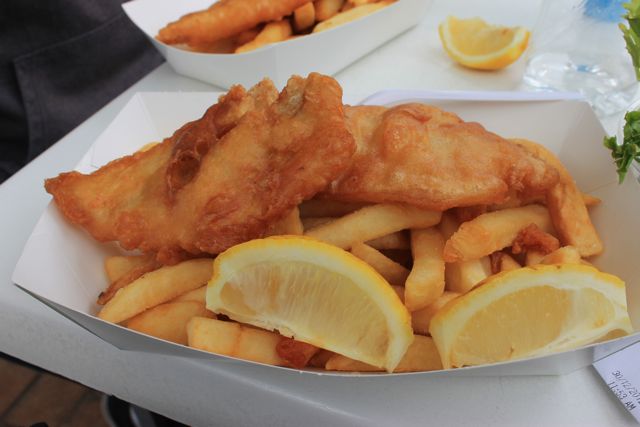 As in New Zealand, this quintessentially British dish has become a national staple in Australia (or so I hear.) I enjoyed some phenomenal barramundi (very Australia!) at the excellent, albeit pricey, Chish N Fips right on the beach at Coogee, after my grueling–I mean–highly enjoyable and scenic, must-do walk from Bondi Beach to Coogee Beach. Though I didn’t get the chance to try my tastebuds at more than one chippie, I did hear buzz about Fishmongers in Bondi and Manly and A Fish Called Coogee in…Coogee. So if that’s your bag, baby, you may want to try your hand (mouth?) at one of those fine establishments as well.

If you’re aching for a little pub action in Sydney, then day drinking in “The Rocks,” a hip, historical neighborhood of Sydney, is your spot. A few places of note: Hero of Waterloo (Sydney legend has it that they would give out free drinks, get men really pissed, and then sneak them down a secret passageway and on to a boat for an involuntary go at being a sailor.), Fortune of War and Lord Nelson (two places claiming to be the oldest pub in Sydney), and the Australian Heritage Hotel (see below) At almost any place you can get this: 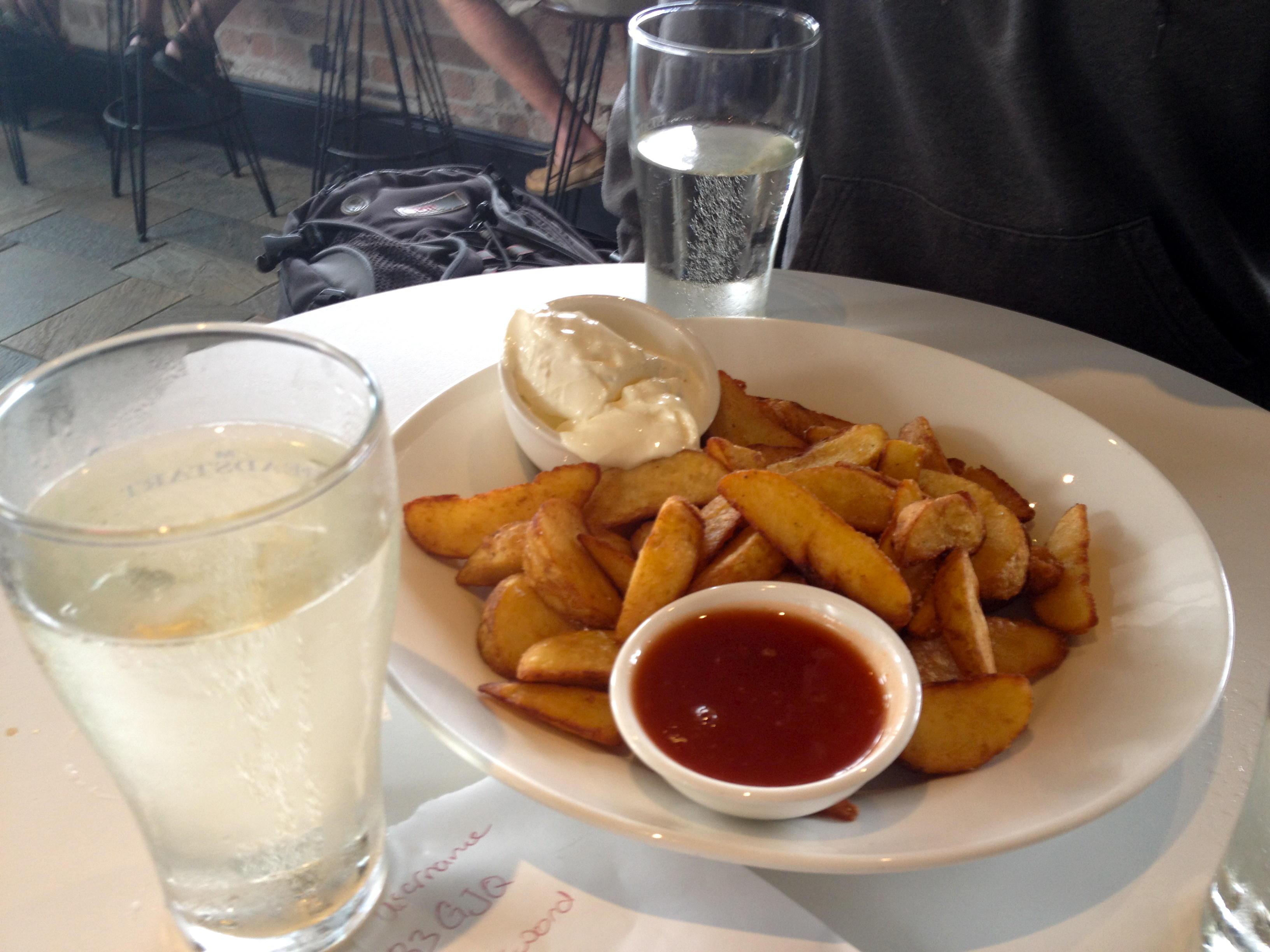 Wedges with sour cream and sweet chili sauce. (and cider to drink.)

I know, I know, I wasn’t too keen on it either initially, but it’s strictly Australian and surprisingly awesome.
I was surprised to learn that Australians don’t really drink much Foster’s (myth-busted!)  A few names that I saw a lot of included Cooper’s, James Boag’s, Bluetongue, and Toohey’s.  I say you can’t go wrong with going to any pub and selecting an Aussie beer from the tap.

Close your eyes, spin around, and pick a restaurant in Chinatown. Though I personally did not eat in Chinatown (I was too busy stuffing my face with laksa…). I’ve heard nothing but rave reviews about eating in Sydney’s Chinatown, and I can’t wait to go back and correct this foodie mishap.   If you’ve got the time and inclination, I doubt you’ll be disappointed.

Talking to any food-loving, friendly Sydney-sider (and you will find plenty of them), you will likely get mixed reviews on whether or not to try kangaroo.  Or emu.  Or crocodile for that matter.  Only in Australia right?

Many will tell you they believe we shouldn’t necessarily consume any animal that is part of the Australian national crest.

Others will say it is fairly tasty, and you’ve simply got to do it. If that’s the case and you’ve decided to try it, many will agree a famous “kangaroo pizza” from one of the oldest pubs in Sydney, the Australian Heritage Hotel, is the way to go.  You can also try emu (the other half of the crest) or crocodile if it suits you.  I prefer feeding kangaroos to feeding on kangaroos, but you can’t deny it’s a unique experience.

Last but certainly not least, if you haven’t already…you simply must go for it and try Vegemite while in Australia.  Aussies just love the stuff.  More of an overall Australian experience than a Sydney specific tip, if Sydney is your first entry to the country, I expect you to add this to your Sydney food list.  I had yet to taste it, but I had heard things (oh, yes) about the detestable smell and the yeasty weirdness that is beloved by so many. 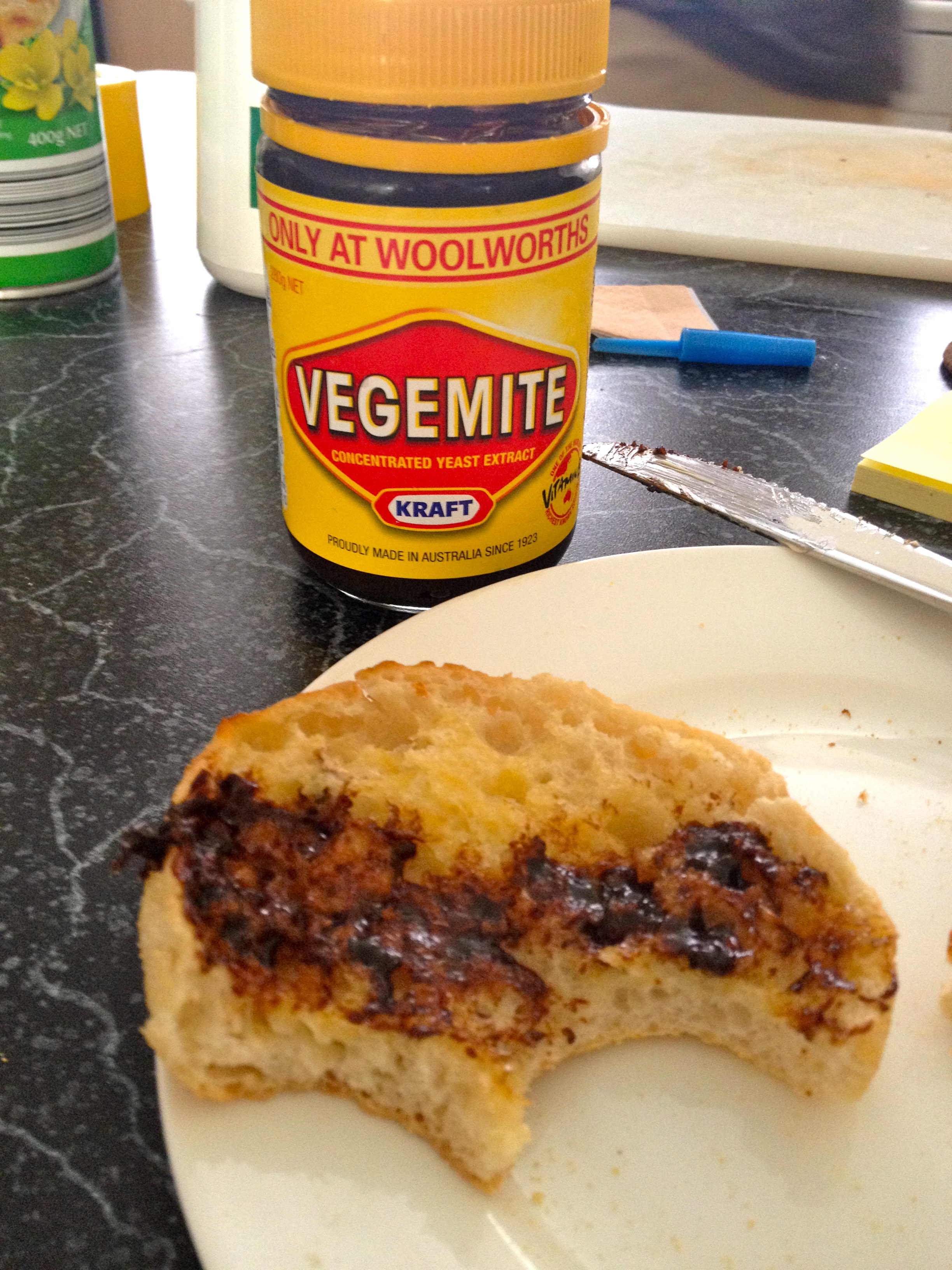 “This is the amount a confident Vegemite eater would consume.” – my friend, the Australian

Again guided by my trusty Australian friend, I was instructed to put the least amount possible on an English muffin one morning.  “Spread less than you would butter.”  Start small, people.  Then you can work your way up to this…

My first trip to Sydney blew me away with its national character and diverse food and beverage options.  While this list is by no means exhaustive, I am fairly certain it will guide you to some of the best the city has to offer.

Leave me your food tips for Sydney in the comments…what have I missed that I’ll want to taste on my next visit? 🙂