I got out with bites marks on my fins…my diving instructor wasn’t so lucky.

So, I was one of those kids who wanted to be a marine biologist.  *I know, I know…didn’t we allllll want to be marine biologists?*  No but, really, it was the first (and only) time I was truly convinced of my life’s purpose.  In the fifth grade, we all had a “job shadow” report to complete, and me, being the over-achiever that I am, drove five hours to Monterey (Bay Aquarium) with a friend to pretend to be a marine biologist for a day.  I can tell you my aspirations to really actually be a marine biologist lasted oh…say……a quarter at UCLA (my first quarter) until I quickly resigned to general confusion, followed by  the realization that I wasn’t cut out for a degree in science (sorry.)
This long anecdote comes with an epic travel story, I promise. 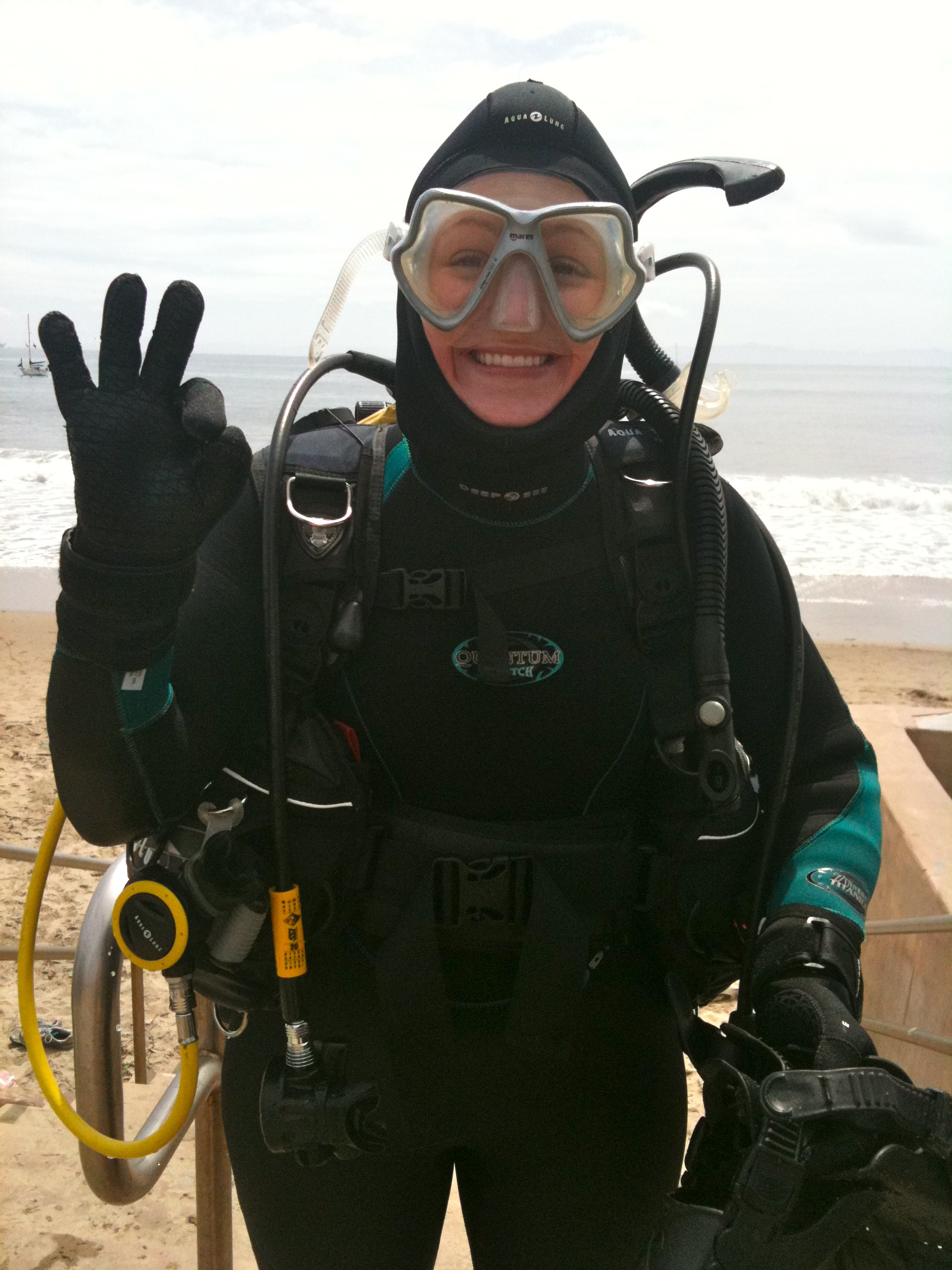 So I waited many a year to finally get my scuba certification.  MANY a year.  If it were truly up to me, I would have been 60 feet under the sea at age twelve. However, as life played out, I finally realized this dream in the summer of being being 23.

After freezing my tush off in the friendly Southern California waters, I decided it was time to put my skillz (with a ‘z’) to the test on my first international scuba trip, in THAILAND.

But not before asking my boyfriend to also get certified.  It was one thing to be terrified at 60 feet under, another to have  good company watching out for your air down there.

He didn’t make it.  No, literally, he tried.  Gotta give the boy credit.  He was massively into the ocean, being in the water, or so I thought.  Poor man was victim to a surfing accident that made him feel claustrophobic under 10+ feet of water.

So, I would have to go it alone.  Really, alone.  My first dive trip outside the amazing California waters was to take place off the waters of Koh Phi Phi and Koh Tao, Thailand.  BY MYSELF.

Not a big deal, right?  At the time, I wasn’t much of a solo traveler.  Also, I was kinda secretly majorly scared of jumping in the open ocean by myself with minimal diving experience.  Yet I found myself jumping off the sides of boats with strangers checking my equipment (NBD, right?!) to make sure I could breathe.

Actually, the hardest part is descending and *gasp* ascending.  When you’re in the water, in front of a reef, (as long as you can get your buoyancy somewhat right) you’re in heaven.  No really, it feels like you are floating slash possibly just peacefully existing  amongst the beautiful ocean depths.  It’s the time before (and after, if you don’t have the luxury of a dive computer on your wrist) that’s mostly scary.  That’s when the creepy stuff you breezed over in dive school can actually happen.  But not to freak you out or anything.  (Diving is amazing!)

Needless to say, I was pushing myself out of a clearly defined comfort zone when I jumped off the side of a Thai dive boat in Chumphon (in search of whale sharks, what else?)  I actually switched dive companies mid-trip because the huge dive resort I was staying at didn’t have a morning expedition to this epic dive site, where you dive to the maximum depth (as a beginner diver) before you see signs of life, in hopes of seeing the illusive whale shark in open water.  It ended being an overall better experience, (contact me for more info if you’re headed to dive in Koh Tao!). 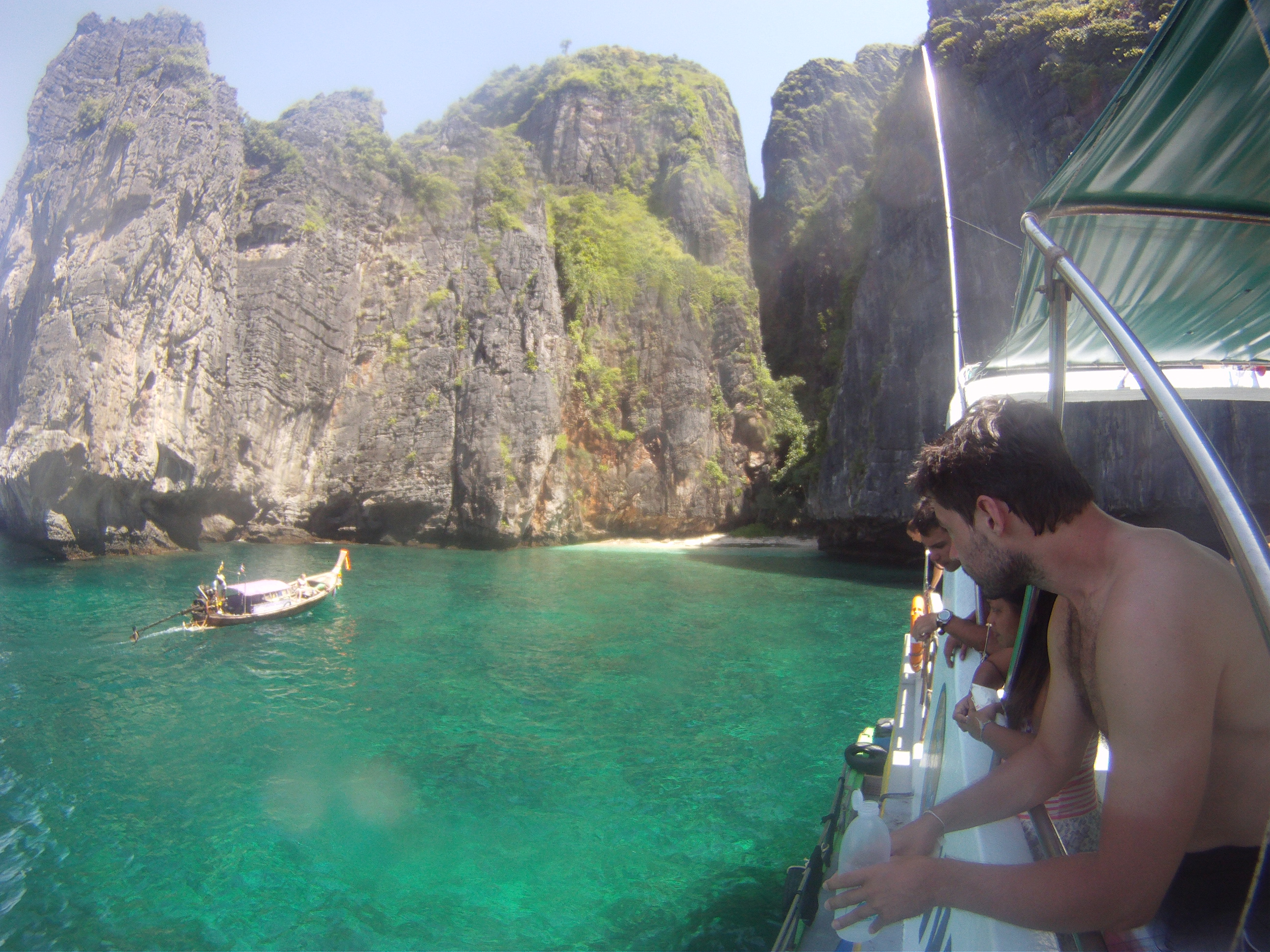 My first American dive buddy/instructor (I think he was American?  He was illusive.)  ensured me (before Chumphon) that we were taking part of a fairly easy, normal dive before heading to the big leagues (the open ocean where I would be totally scared.)  The reef was only 20 feet below, and he would use hand signals to let us know of any sealife (friend or foe) ahead of time.  He taught us the fairly obvious (octopus, shark) and the obscure (turtle, eel) and finally he positioned his hands as if shooting a gun.

…What?  What are you doing, Mr. Dive Instructor Person??

That looks like you’re pulling a trigger.  It means triggerfish, you say?  What’s that?

Oh, the harmless triggerfish.  Like the humuhumunukunukuapua’as I’ve seen a billion times in Hawaii, right?  Okay?  No flesh-tearing sharks or human-hungry predators waiting for me down there?  Let’s go. 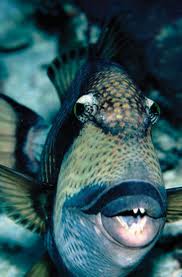 THOSE TRIGGERFISH ARE FIERCE.  And they are deadly.

First dive off Koh Tao, the “easy dive.”  My dive instructor/buddy guy was floating effortlessly through the reef.  This is really beautiful, I thought.

We were told that at this time of year (April) the triggerfish may be nesting.  Great.  But if they get territorial, alls we need to do is swim away horizontally—because they protect their nesting area vertically only.  PHEW.

So I see my experienced, fearless, Thai-resident dive instructor swimming kind of frantically in front of me.  But hey, it’s only this  large, goofy-looking triggerfish, right?  Then I did an underwater double-take.  Those teeth are massive, and loud.  But only for chewing coral…that’s what they said!

All of a sudden I start to panic.  This isn’t normal.  None of my dive buddies, including my instructor guy, are anywhere to be seen.  What the hell happened?  UMMM I can’t deal, guys.  I’m a beginner, remember?!

The fish seems to be following me, waiting to strike.  So I did as I was told when I was barely listening, and began to swim backwards, flailing my fins in as non-panicky  a manner as possible.

Next thing I see is my dive “instructor” with a thumbs up.  No, he’s not “okay,” as you scuba-certified readers realize in this moment.  He needs to ascend.  But we’re only 10 minutes into a 45 minute dive…whatttttt.  I only get a small number of dives in the Andaman Sea, thanks very much.  Not into it.

Nonetheless, I am starting to panic into breathing heavily, and my regulator doesn’t appreciate it.  Not to mention you consume air at a much faster rate when freaking out.  So I ascend at a rate that makes my body happy and reach the top of the waves to see what the heck is up.

HE WAS BIT.  For the first time in his many years in Koh Tao, my dive instructor took a brutal bite to the shin.  And I mean, brutal.  Not just black and blue, but a chunk of his leg is missing.  Some of the other divers were dramatically exclaiming that their bites have a natural poison which can cause paralysis. And the saltwater is having fun getting up in that.  OUCH.

So that’s was the end of that dive trip.  I still did five more dives in Koh Tao.  Each dive however, I was looking over my shoulder, in fear….not of a shark, not of a premature ascent, but of the dreaded triggerfish.

It may be a pretty fish, but it is also feisty.  My advice: watch out for its devious smile and its vicious set of teeth, especially during nesting season.

What a joy it is to be wandering winding streets,

Like so many of us, I’d been dreaming of travel