Home » Travel » Stories From the Road » Five Months of Travel: A Summary

What does it take to travel across three continents in five months?

Answer: approximately nine donkey rides, three camel rides…
After spending half the year exploring Asia, the Middle East, and Europe, I flew home from Paris exactly five months to the day I left for Hong Kong. 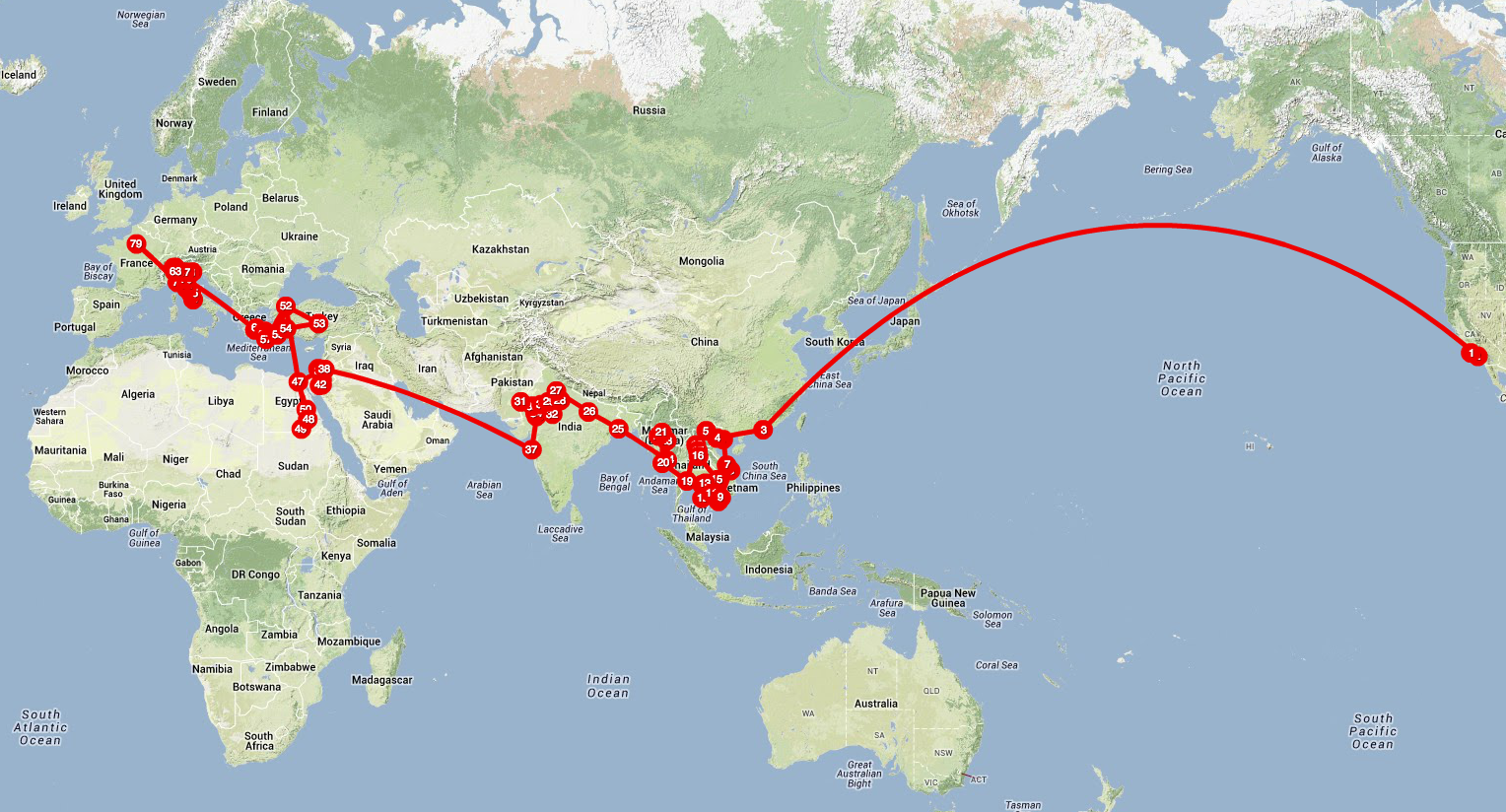 All 79 stops of my five-month world tour, minus the flight home. 🙂

I’ve been home for two weeks now, and I’ve already gone through a range of emotions.  On the one hand, I am overwhelmed with gratitude for the months abroad—the experiences, people and perspective traveling across fifteen countries brought me.  On the other, I am literally scratching my head in disbelief that it’s already over, feeling oblivious as to what’s next.  Figuratively I am doing everything I can to resist scratching that itch to hit the road again that resurfaced after a mere three days.
In many ways, I know I’ll never be the same.  That’s what travel does to us.  It changes us.  That’s why I chase after trips abroad in the same fervent manner that some people chase their life goals.
At the exact same time, however, things are exactly the same. I stood today in the exact spot where I had laid out all of my items for packing.  It looks and feels the same all around me.  My apartment is still here, relatively unscathed. My clothes are all here, too, but they fit differently on me (no complaints there.)  The big questions I had before I left?  They’re still here, too.
As I sort through all these new emotions, I thought it best to objectively summarize my trip. You’ll get a sense of where I went and what it took to get there.  (Why did I take this trip? Catch up here.)

Compiling this list, I can’t seem to grasp how much life I was able to pack into those five months AND…how alive I felt every day!  I also can’t seem to integrate that feeling with the starkly opposite routine my days have adopted since my return.  It’s great to be jobless, carless, even a little careless when you’re running around Hanoi/Yangon/Mumbai/Cairo/Paris.  It looks a little bit differently you insert yourself back into “real” life and find that you have nowhere to go but your couch.
Translation: How do I reconcile the person I was while traveling with the person I am at home?
So I find myself a part-time traveler once more.  My equilibrium brilliantly thrown off by the greatest trip of my life to date — I’m again back at my desk pondering the balance between globetrotting and rooting oneself in a home.  And I’ll be bringing you my findings here on Part-Time Traveler, so stay tuned.

What are your questions for me now that I’m back?  I’ll be answering your FAQs — including those I received while I was away — next week!

Not Como but…Iseo! Looking to return to the lake